Safe To Fish in the SF Bay? ‘Harmful’ Algal Bloom Rages On, Killing Thousands of Fish

A harmful algal bloom has been slaughtering fish across the San Francisco Bay for weeks, but as anglers continue to catch fish—is it safe to do so?

Shocking images of hundreds of dead fish and stingrays washing up at Lake Merritt and across Bay Area shores have surfaced across news outlets and social media recently, sparking worries that the bloom is dangerous.

But the algal bloom isn’t known to be toxic to humans, and so far the advice says you should keep pets away from the water and not to eat the algae or any dead fish onshore.

Eating live-caught fish shouldn’t pose a risk to humans, according to the Department of Fish and Wildlife’s Office of Environmental Health Hazard Assessment. But other scientists say it’s better to be safe than sorry.

“I wouldn’t eat fish caught during this bloom,” said William Cochlan, senior research scientist at San Francisco State University’s Estuary and Ocean Science Center, one of few places that has grown this species of algae in their lab.

“This is primarily out of an abundance of caution,” continued Cochlan. “We don’t know any humans who have gotten sick from this specific type of bloom, but to be safe I would avoid eating any caught fish from the bay until it’s gone.”

Read the full story on The San Francisco Standard website. 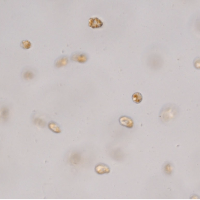 On the enigmatic ‘flying potato’, neither plant nor animal, that caused the Bay’s biggest harmful algal bloom in history
Improvements eyed for San Francisco Bay in wake of algae bloom
Safe To Fish in the SF Bay? ‘Harmful’ Algal Bloom Rages On, Killing Thousands of Fish 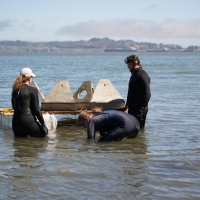