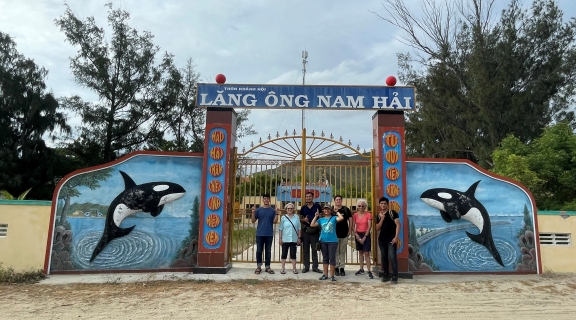 There is a gap in information regarding the distribution and abundance of marine mammals along the coast of Vietnam.  This is true for both cetaceans (whales, dolphins, and porpoises) and sirenians (dugongs).  This lack of information poses a great challenge to conservation efforts from emerging anthropogenic threats to marine mammals in Vietnam.  In general, our knowledge and information on cetaceans inhabiting Vietnamese waters is outdated, scattered, and inaccessible to policy makers, conservation practitioners and the public. This absence of evidence-based knowledge also means that the conservation of cetaceans in Vietnam is largely driven by anecdotal information rather than science.

Whale temples have amassed a sizeable number of specimens that have been used as a valuable source of information concerning marine mammals in Việt Nam. Previous studies have examined some whale temples in southern Việt Nam, but contents of whale temples along the whole coast of Việt Nam have not been fully documented. Here we surveyed throughout central and southern provinces, areas that had not been scientifically documented previously. These records further underscore the importance of whale temples both as places of historical culture and reverence, and important repositories of biodiversity data, from which data on former and current marine mammal distributions can be derived.

Dr. Ellen Hines, the Associate Director of the Estuary & Ocean Science Center, is a Professor of Geography & Environment at San Francisco State University.  Her research addresses population and community ecology of threatened and endangered species incorporating local conservation efforts and regional scale coastal and marine management science. Her emphasis is on the evolution of consistent standards of field methods and monitoring techniques, and the creation of educational materials to be applied to community-based conservation planning. Dr. Hines has extensive (since 1990) experience in GIS and remote sensing for marine and coastal spatial planning.  She has conducted marine mammal research in Thailand, Vietnam, Cambodia, Malaysia, Myanmar and Belize since 1999.  Dr. Hines is an ASEAN research Fulbright Fellow, and a member of the International Whaling Commission Expert Advisory Panel on Bycatch.  She is committed to collaborating internationally with in-country scientists to solve conservation problems threatening marine mammals. In California, Dr. Hines works closely with the National Marine Sanctuaries and local scientists around San Francisco Bay to model habitat and human uses for marine mammals and seabirds.  With her students, she works to create risk assessments for anthropogenic threats such as shipping collisions, marine megafaunal bycatch and the effects of sea level rise on pinnipeds, sea otters, and birds in coastal estuaries.