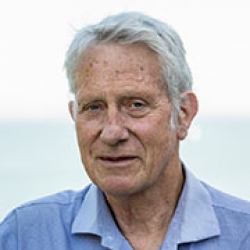 I am interested in applications of acoustic techniques to make measurements and observations in the ocean, the Bay, the Estuary, and California rivers.  I have analyzed acoustic data from Pioneer Seamount for properties of blue whale calls, detected production of solitary waves by ferry boats in San Francisco Bay, and studied the net discharge of fresh water from the Central Valley into San Francisco Bay.  Currently I am recording underwater sounds from the RTC research pier, and the recordings of the mating call of the Plainfin Midshipman are being studied in collaboration with a colleague in British Columbia.  These sounds can be found online in near-real time at http://bayacoustics.sfsu.edu.  I am also using an X-band marine radar to record wave patterns at a site of major coastline erosion, on Ocean Beach, San Francisco.  Data from this study is on line at http://abdus.sfsu.edu/oceanbeach/html/.